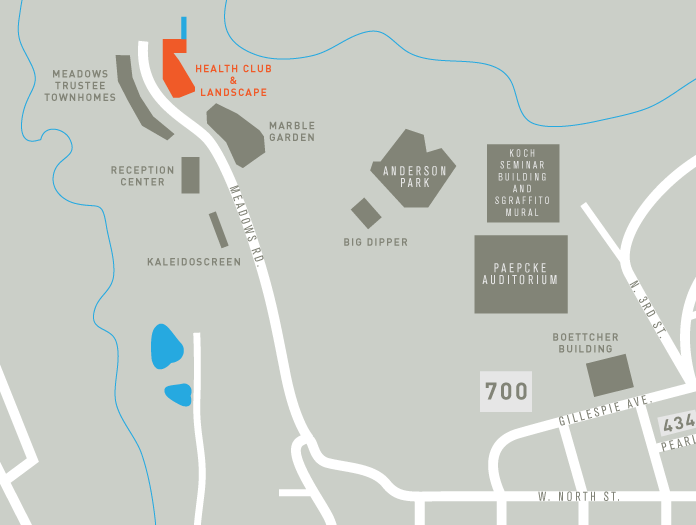 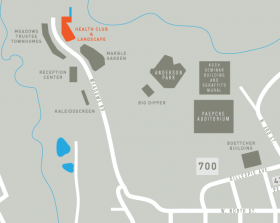 Spread across a meadow not far from the West End, near the track where local plutocrats raced their thoroughbreds in the town’s heyday, is the distinctly modern campus of the Aspen Institute for Humanistic Studies – German Bauhaus design transplanted to the Colorado Rockies.  The Institute was an outgrowth of Walter Paepcke’s Goethe Bicentennial; intelligentsia and elite traveled to Aspen in June 1949 to celebrate the historic, deep, and abiding philosophical ties that America and the rest of the world had with Germany, despite the aberration of Hitler and the Second World War, and to hear concerts, lectures, and, best of all, Albert Schweitzer.  Its architectural centerpiece was the Big Tent, designed by famed modernist Eero Saarinen, which epitomized the festive but modern nature of the August gathering.

Everyone agreed that Aspen’s mountain setting had much to do with the festival’s success.  The following June, the Aspen Institute opened the first of its summer seminars, where businessmen and intellectuals gathered to listen to such thinkers and doers as Mortimer Adler and Adlai Stevenson and to ponder universal ideas similar to those of Paepcke’s “Great Ideas” advertising campaign.

The Aspen Institute campus was designed without a master plan but loosely organized in three main areas- housing for guests, institute administration and activities, and affiliated institutes.  The first permanent building was the 1953 Koch Seminar Building, designed by Bayer with Benedict as the associate architect, a pattern that held through the 1950s.  Constructed of steel frame and cinder blocks, it had a sgraffito mural on its exterior and two hexagon-shaped interior spaces designed to facilitate discussions around a central table, a large room with “star-like folded planes” on the ceiling and gray walls, and a smaller room with colorful walls.

In 1954, Bayer and Benedict designed two more institute buildings. The Aspen Meadows Guest Chalets, three flat-roofed, two-story buildings, each with colorful balcony dividers of blue, red, and yellow, respectively, were loosely grouped around a central building that housed a restaurant (known as the Copper Kettle), lounges, and offices.  The Central Building – flat-roofed, two-story, clerestory-lit – combines cinder blocks and local moss stone, creating a distinctive structure at once Wrightian and Bauhaus.  A year later, the pair’s 1955 Health Center for the Physical Therapy Program of the Aspen Institute, with the structural expertise of Otto Buehner, used pre-stressed and prefab concrete and open ends glazed for clerestory light.  Sited at the junction of the Roaring Fork River and Castle Creek, the modern complex had a gymnasium; massage, sauna and steam rooms; a plunge pool; and library/sitting room.  Bayer also created environmental sculptures, the 1954 Grass Mound (located in what is now called Anderson Park) and 1955 Marble Garden, which predated the “earthwork” and environmental sculpture movement by at least 10 years.

Walter Paepcke died in 1960, and one of the ambitious plans that died with him was his 1950s scheme to build an architectural village on the outskirts of the Aspen Institute, featuring seventeen of the world’s most notable architects.  Walter Gropius, Marcel Breuer, I.M. Pei, Minoru Yamasaki, Edward Durrell Stone, and Phillip Johnson were among those who accepted his offer to design and build houses.  Eventually Henry Luce and Time magazine agreed to put up a million dollars for the “living architectural museum.”  Groundbreaking was set for April 1960, but Paepcke died on April 13 and plans for the village were never realized.

Yet the Aspen Institute continued to play a vital role in Aspen’s cultural and intellectual life and to carry on the International Style of modern architecture.  In 1962, Bayer, with Harry Ellenzweig as assistant architect, designed the Aspen Institute for Theoretical Physics, a one-story, terne-roofed structure of cinder block and redwood, with offices for the theoretical physicists and a walled patio for social gatherings.  An even more elaborate multi-functional structure of concrete and cinder blocks with a neoprene roof, the Walter Paepcke Memorial Building also went up in 1962.  Bayer was the head architect, with assistance from F. Bates and Ellenzweig, and structural engineering by Bierbach and Horton.  In 1964, Bayer designed the Concert Tent, which was demolished in 2000 and replaced with a design by Harry Teague.

In a sense, the rigorous Bauhaus modernist environment of the Aspen Institute mirrored the high-minded thinking within its boundaries as well as effectively separating it from Victorian mining-era Aspen, ski-town Alpine, rustic eclecticism, and organic Wrightian modernism.