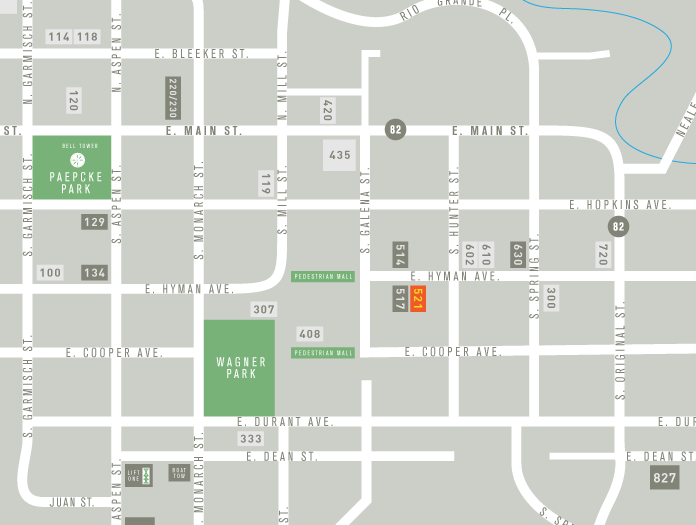 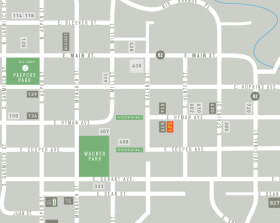 Tom Benton was an iconic Aspen 1960s local: a non-conformist, local activist and a self-defined free spirit.  While he was a trained architect from University of Southern California, Benton chose to work for himself and develop his art through silkscreens, monotypes and oil paintings.  A retrospective book of his life and work titled “thomas w. benton: artist|activist” was written by Daniel Joseph Watkins and published by the People’s Press in 2011.

521 E. Hyman was the first building Benton built in Aspen. It was built one story at a time.  He built the gallery and studio space on the first floor and a residence on the second floor. The third floor was added in 1973.  It served as a gallery, residence, and studio for his art work.  In addition, according the Watkins’ book, “Benton became involved in politics and his gallery soon became the central meeting place for local intellectuals, artists and activists.”  He sold the building in 1975.

Benton was best known for his activist posters and artwork. He collaborated with Hunter Thompson and others to create “images that helped to define Aspen’s tempestuous political and social upheavals” in the late 1960s. His work also included national anti-war and political posters.  Benton’s artistic style had an Asian influence with the use of circles and the balance of his compositions.  He included geometric shapes such as triangles and rectangles which convey depth, dimension and volume.  These characteristics are clearly evident in the architecture of the Benton Building.  The cinder block walls on either side of the property protrude beyond the façade of the building to create a rectangular volume inside of which he constructed his studio.  The building plays with solids and voids through the use of geometric shapes.  Benton used natural materials, and according to Watkins he used local materials “such as cinder blocks from nearby Dotsero and the aluminum printing plates discarded weekly at The Aspen Times.”  His architectural style was in line with other local architects such as Charles Paterson and Robin Molny.

More interested in graphic art than in architecture, he still designed the occasional building, including a residence for actress Jill St. John. His funky, organic, California esthetic was in sync with Aspen’s Wrightian tradition.  His designs, such as the Patio Building aka Crandall Building (1969), a flat-roofed commercial building at 630 E. Hyman, exhibit a similar interest in natural materials, simple geometric shapes, deep overhangs, horizontal emphasis, and orienting the building to frame views toward the mountains.